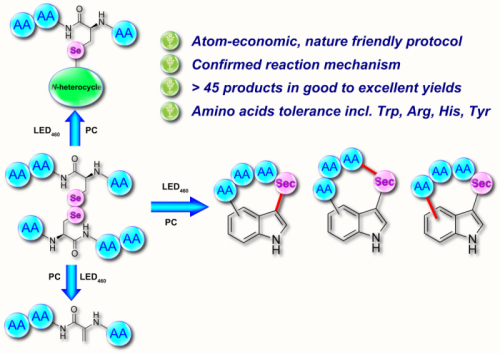 A straightforward and atom‐economic method for the functionalization of short selenocystine‐containing peptides proposed by researchers from the Pharmacomodulators Synthesis Group (LIOS) has been published in the journal Advanced Synthesis & Catalysis (IF = 5.851).

The synthesis protocol is based on the generation of selenium radical via visible light‐initiated reaction in the presence of transition metal‐free photocatalysts. The selenium radical is further oxidized to an electrophile and trapped by N‐heterocycles. The mechanism is confirmed by NMR, HRMS, UV, EPR and cyclic voltammetry (CV) experiments and photocatalyst emission quenching studies.

Authors have demonstrated that this synthesis method is tolerant to unprotected peptides as well.