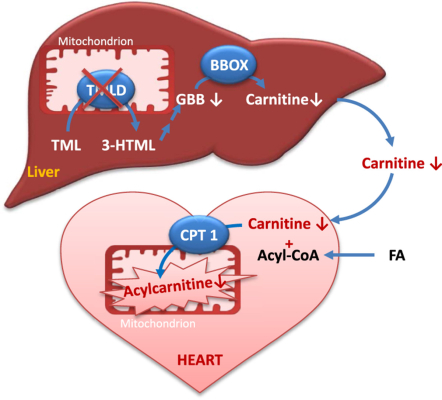 A novel target for cardioprotective therapies – enzyme N6-trimethyllysine dioxygenase (TMLD) – has been identified by researchers from the Latvian Institute of Organic Synthesis (LIOS), the Tartu University (TU) and Riga Stradins University (RSU). This research is published in the journal “Free Radical Biology and Medicine” (IF= 7.376).

A constitutive whole body TMLHE mutant mice model which is characterized by a lower carnitine and acylcarnitine content in heart tissues has been developed for the first time by researchers at LIOS, TU and RSU. They demonstrated that a TMLD enzyme deficiency and accordingly the lower level of carnitine did not cause any severe phenotype, heart and muscle functions in mutant animals were completely normal.

Using this mice model, researchers provided experimental evidence that the decrease of long-chain acylcarnitines in the heart ensures the cardiometabolic changes that lead to mitochondrial survival and reduced infarct size during ischemia-reperfusion.

This research was supported by the Latvian Council of Science, project TRILYSOX, grant No. LZP-2018/1-0082 and authors were supported by the European Union’s Horizon 2020 research and innovation programme, project Fat4Brain, grant agreement No 857394.

This website uses cookies to improve your experience while you navigate through the website. Out of these, the cookies that are categorized as necessary are stored on your browser as they are essential for the working of basic functionalities of the website. We also use third-party cookies that help us analyze and understand how you use this website. These cookies will be stored in your browser only with your consent. You also have the option to opt-out of these cookies. But opting out of some of these cookies may affect your browsing experience.
SAVE & ACCEPT