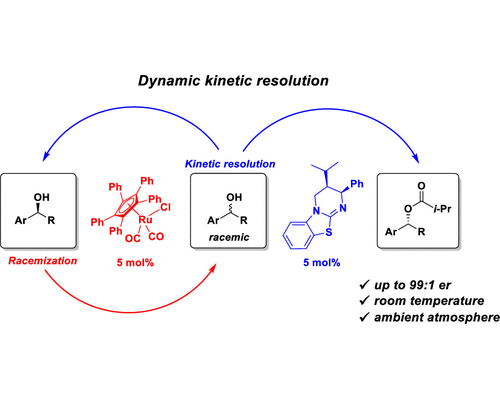 Enantiopure secondary alcohols are valuable intermediates in medicinal chemistry since many marketed drugs such as crizotinib, lorlatinib, cenobamate, atomoxetine, and duloxetine are derivatives of chiral benzylic alcohols.

This approach is based on a non-enzymatic dynamic kinetic resolution of secondary alcohols by enantioselective acylation using an isothiourea-derived HyperBTM catalyst and racemization of slowly reacting alcohol by Bäckvall’s ruthenium complex. The benefits of the reported method are high enantioselectivity of the product (up to 99:1), employs easy-to-handle crystalline 4-nitrophenyl isobutyrate as the acylating reagent, and proceeds at room temperature and under an ambient atmosphere.

The research is published in the Journal of Organic Chemistry (IF=4.335).